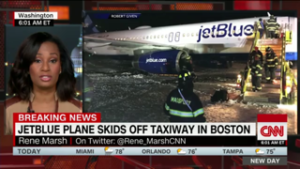 It is disconcerting to see this type of news about airplanes sliding off of runways. I want to discuss with you why these events take place and how they are normally avoided.

It is efficient for the airlines to fly large jets into smaller airports where people want to fly for convenience. Examples of these situations are LaGuardia in New York, Burbank and Orange County in California, Kahalui in Maui, Lihue in kauai, etc. Airplanes such as Airbus 319s and A320s, Boeing 737 300s through 700 models and 757 200s are fine for near sea level, non contaminated (ice, snow, sleet, freezing rain) runways that are 6000ft in length. For the A321s, B737 800 and 900s, and 757 300s, anything less than 7000 ft has our close attention. We go into “aircraft carrier mode” planning to put the jet down firmly on a spot no later than 1000ft down the runway, using lots of trailing edge flaps to keep the speeds as slow as possible, and use maximum deceleration once on the runway. This includes maximum thrust reversers deployment, automatic spoiler implementation, and maximum auto or manual braking. Rarely, pilots will come in too hot and or too high. Instead of going around for a missed approach, they try to force the issue, land long or fast and cannot stop the jet before the end of the runway. There are seldom injuries in these cases because the jets are at minimal speed by the runway excursion point.

The airports are responsible for de-icing the runways and keeping them as clear as possible of contamination. Depending on the weather conditions, it can be a challenge to keep up with the more intense build ups and sometimes they must close the airport. It takes time for the operators to work the equipment down the runway. During that time, the runway is closed. Air Traffic Control will slow us way down in the sky or hold us while this runway clear off is taking place. Most often, only the first two-thirds of the runway is de-iced. This creates a situation as above with a shorter “available” runway to land on and decelerate to a stop. The runway turn offs to the taxiways are not usually de-iced. We must slow to a crawl before we can turn. In rare situations, the crews had either run into the last icy one-third of the runway or taken a turn to the taxiway too fast. Just like in your car on an icy road, we also get a sliding momentum if we hit an icy patch or take it too fast. The airplane will slightly slide off the surface onto a snowy shoulder, grass or snow bank and no one is injured.

One dark and blustery night in Denver, we had to make 3 different attempts to land. The weather conditions were blowing snow, near our low visibility minimums, in the dark, with icy runways. We were nearing the runway to land when the tower controller told us to go around because the aircraft in front of us had not cleared the runway. We came back around and on the next attempt, we were told to go around again because the next aircraft in front of us had just reported the braking action was “poor”. They were closing the runway to de-ice it. We came back around for the third time and told them it needed to be the last attempt since we were getting low on fuel. We safely landed on a clean, clear, dark and blustery runway.

Some runways are un-grooved. This means that the friction coefficient of the runway with our tires is much less. Throw in some moderate to heavy rain, and we have ourselves an ice skating rink. This is the case with many of the runways in Mexico, Caribbean, Central America and South America. We do have some in the U.S. as well. We are not allowed to land on these runways in heavy rains but our alert levels are peaked with light to moderate rains on these runways. If we hit a patch of water at our landing speeds of 250MPH for some aircraft, the anti skid braking systems may not be able to keep up with any hydroplaning we may encounter. These anti skid systems sense wheel speed differentials and give braking pressure accordingly. This, with gusty or shearing conditions can make landings very sporty. In rare occasions, the crew may not have kept control of the aircraft on these un-grooved runways. In these situations, there were surprised passengers but minimal injuries.

If you would like more information and understanding of what is taking place in the flying environment, please read my book “Remove Before Flight”. I would love your feedback and reviews since I wrote it to help teach and empower you!

Thank you for flying with me. Blue Skies!