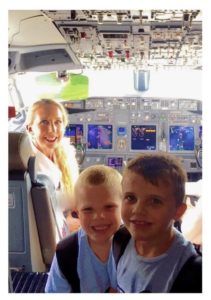 in the past few months, so much attention has been given to negative behaviors and crazy issues so I wanted to write a post to recognize the good stuff! (If you want to cut to the chase, read just the last paragraph!)

I was in a situation recently that was pretty challenging. Just as in the climate change article of The New York Times that I helped contribute to with Zach Wichter about how it affects aviation and air travel, I found myself in a pickle due to these factors! We were at a very high altitude airport for an early afternoon takeoff to the north east coast. Due to two lines of significant weather and the congested airspace in the northeast, air traffic control was having to funnel most of the inbound and outbound flights though just a few gateways of airspace.  Airplanes on the ground, like us, were then “ground stopped” in a ground delay program (GDP) until we could have a “wheels up” time for slotting us into that airspace.

The time assigned to us for takeoff was several hour later. I was concerned that the crew may go illegal due to duty limits because we had all already flown long previous flights coming inbound. It was a 4 hour flight to the east coast and with a several hour delay (that could possibly slide even later), we would not be able to fly. This would cause and even later delay for the passengers with having to replace the crew or a possible cancellation if there were no extra crews available. I conferred with the dispatcher about a possible routing far north, up and around that congested airspace and weather. We agreed it would work and we would no longer have the delayed ATC time restriction. We would have to add more fuel for the new routing, let ATC know we can be released from the original routing and time, and tell the airport ops folks to get ready to board the passengers. All the performance numbers looked good for the weights, runways, temperatures, and winds, for our departure (although we were at our maximum weight).

We boarded everyone and we were all happy to go with just an hour delay only up to that point. In the course of the hour we worked it all out and boarded the jet, the temperature rose several more degrees and the winds dropped off. We now found ourself in the middle of the afternoon with high heat, high altitude thin air, and no headwinds. The jets produce massive thrust but at max gross weight and thin air, it gets to a point where there is not enough thrust produced to create the lift needed for takeoff or obstacle clearance on climb out. The manufacturers calculate a cushion factor but we abide by the performance limits made for worst case scenarios such as an engine failure just before or right at the takeoff point.

Now, to takeoff in these conditions, the performance numbers generated said we needed to be 3000 lbs lighter than we were. I set up a “party line” so that I, the First Officer, the Dispatcher and the Load Planner could collaborate by phone. We tried to think of everything possible option so that we could takeoff safely. We decided that we could do it we offloaded the cargo and burned extra fuel on the taxi out so that we would not have to take off luggage, people, or fuel. If we had to delay the flight until it was cooler or had more winds, this would put us back to the time constraint for the crew.

I made several PA announcements explaining that it would take some time to offload cargo so that we would have “better performance”. As pilots, we walk a fine line between explaining the details of what is happening to keep you informed yet at the same time not creating any fear or concern. I had pressure from all areas to get on our way, but our job as pilots is ALWAYS SAFETY FIRST. Comfort, schedule, efficiency come behind that.

We off loaded the cargo, taxied out to burn a small bit of fuel, and hoped the afternoon thunderstorms in the region would help stop the temperatures from rising even higher. We hoped they would kick up some wind as well. They did and we were on our way!

I tell you this because as I said good bye and gave sincere thank you’s to the passengers on the flight who were deplaning, so many of them verbalized their gratitude and thanks for our efforts. They explained that they appreciated the safe flight, that they felt much better being informed about what was happening, and that they were happy to be at their destination. One man did yell at me saying that I should have never boarded the passengers to begin with. I had done all I could to make sure we were all safe, rerouted us to get there earlier, and prevented a possible cancellation. There was no way to know the weather would drastically change the way it did. So, please know that your smiles and words mean a great deal to us flight crews. I do my best to make sure that goes both ways! I am giving you my sincerest thank you for all you do, all the patience you have, and the understanding it takes to be an air traveler!